The interaction of People magazine-type journalism with MTV-styled marketing imagery to form modern fiction has been well documented by now.

More recently, however, there has been something of a reverse trend, the effects of contemporary trash on a hybrid genre of pre-corporate literature, leading to a small group of writers with less emphasis on (the) douchebag behaviour, F-words, and bloodbath violence, and more on storytelling morality, innovative depth, and character integrity.

One major source of this new format in the mid-to-late 1990’s has been Kingston, Ontario, which has nurtured such talents as Diane Schoemperlen, Merilyn Simonds, and Steven Heighton.

One visible leader of the new approach is Brian Howald, a K-town author who was influenced more by writers from the past than the present.

Born in Winchester, Ontario on February 11, 1963, Brian grew up in nearby Morrisburg, a small town on the St. Lawrence River that Jane Fonda talks about in her memoirs, My Life So Far.  Brian’s father taught geography in high school and his mother was a travel agent.  With his older brother and sister, Brian’s earliest childhood memories were of growing up on Loyalist Street and later on, learning how to skate and play hockey.

When he was five, he started elementary school and learned his letters from the new version of McGuffey’s Reader.  After getting tired of Jack & Jill stories Brian started going through the Hardy Boys books.  One of the first “serious” novels he read, at the age of eight, was Harper Lee’s To Kill A Mockingbird.

In 1975 Brian became interested in music and started playing 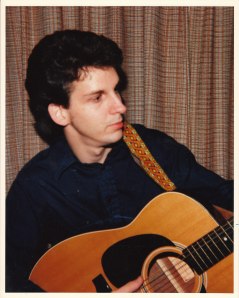 guitar.  His favourite song around this time was the classic bubble gum anthem for plastic-trash teen culture, Saturday Night by the Bay City Rollers.  Although his background wasn’t Scottish, Howald wore his tartan proudly.  A couple of years later he began to sing and in the early 1980’s, commenced a part-time career as a nightclub artist.  He did gigs in Cornwall, Ottawa, Brockville and many other cities.  Alongside his live performance aspirations, Brian commenced a parallel career as a dancehall disc jockey; he provided the soundtrack for many wedding parties, banquets, and anniversary celebrations.

Brian attended Seaway District High School in Iroquois before enrolling in a television & radio broadcast course at Loyalist College in Belleville.  From there he moved to Toronto.

Meantime, he continued his musical career and appeared in various clubs and coffee bars. 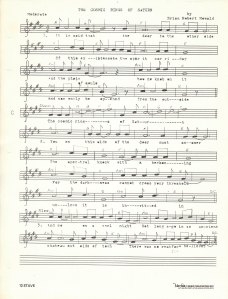 No stranger to prose, Brian was already writing lyrics, songs and stories to go with the guitar, bass and banjo he played during his days as a singer.

He began his writing career proper in Toronto, doing copy and penning an unsold script to various pass-the-hat agencies where the owners were usually broke.

When tunesmith money became something of a handicap, he began working as a movie extra and appeared in over a dozen films, but T.O. was Brian’s “performance” scene until he re-deployed to Kingston in 1987.

Now highly experienced with a keen eye for opportunity, Brian found daytime employment – as an office clerk – at Theatre 5, a local repertory company.  At night he did the occasional gig as a singer-songwriter.

By 1988, with the hire-purchase music market changing from professional live entertainment to computerized karaoke, Brian made the vocational move from one artistic medium to the other.

After he left music he studied journalism, English Lit, screenwriting, military science and American history, all of which he learned well.

In K-town he wrote rock and roll reviews for the (now) defunct Between The Lines before pursuing something a little less transient than a socialist tabloid.  Among his first feature-length efforts (in 1991) was a potboiler crime drama which although optioned, only led to a “kill fee.”

Since the early 1970’s Brian has read a host of novels, many of

which provided inspiration for his own fictional works.  Among the more influential volumes in his library is The Pastures of Heaven by John Steinbeck, especially the chapter called “Junius Maltby.”